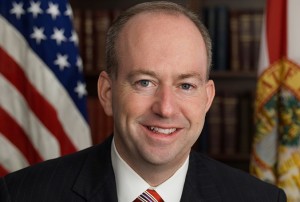 Former U.S. Sen. George LeMieux has dropped out of the 2012 race for the United States Senate in Florida.

LeMieux said he could only match that support with substantial advertising or the opportunity to debate on statewide television.

LeMieux was appointed in 2009 to the U.S. Senate by former Gov. Charlie Crist to complete the term after Sen. Mel Martinez resigned.  Crist ran for the seat in 2010 without party affiliation and lost to current Sen. Marco Rubio.

Media release from the LeMieux campaign:

“For 16 months I had the privilege of my life serving the people of Florida in the United States Senate. What I witnessed compelled me to return.  Bloated government that keeps job creators from hiring and a government so far in debt that it will bankrupt this nation by the end of the decade if serious changes are not made.

We have campaigned on ideas, to balance the budget, to create jobs, to gain independence from foreign oil, and to improve our children’s education. And while our campaign has been strong, gaining support and winning straw polls, the decision has been made by party leadership that there is a better candidate to face Bill Nelson.

The establishment has thrown their support behind my competitor, Connie Mack. Ahead of us in the polls, the Mack name enjoys widespread recognition that can only be matched with substantial advertising or the opportunity to debate on statewide television.

Advertising, which our finances cannot support, and debates, which my competitor won’t agree to.

It is not my nature to step aside, but there is a reality to running a statewide race in Florida. Without the resources or the opportunity to debate, our message simply cannot be heard.

This campaign was never about me. It was about my four kids, and your kids and grand kids. And ensuring that they inherit an America with as much opportunity and prosperity as the America left to us.

As a former party chairman, I know that sometimes for the good of the party, and the good of the nation, a candidate has to bow out gracefully. In order to have the best chance to defeat Bill Nelson and put the Senate in Republican hands, today we will end our campaign.

To continue would only hurt our chances in the fall, and that is not something that I will risk. Connie Mack will be our nominee. He has my support.

Words cannot express how grateful I am for all of you that supported our endeavor. You have my friendship and eternal gratitude. To all of our supporters, 67 county chairs, the 35 state legislators that endorsed me, as well as the dozen of opinion leaders that lent their effort to our team, our finance team, and everyone who opened their homes and their hearts to me, thank you. I will always be grateful for your support.

For now, I will continue to fight for our candidates and our conservative values, and look forward to reengaging in my law practice at the Gunster Firm. And most importantly spending more time with my wife Meike, and our four children, Max, Taylor, Chase and Madeleine, or as I like to say—three monkeys and a princess.

2012 is the more important election of our lifetime. Please do everything you can to support our candidates. And from the bottom of my heart, thank you.”